The idea of ‘cloud’ computing has been around since the first web based email services but only in the past few years has the term become mainstream.
Here I look into software that runs somewhere other than on your PC.

In the vision 2011 video we can clearly see in some scenes the phone is actually semi transparent and as well as having a front touch screen the entire of the back of the phone is touch sensitive as well. The benefit in this is that you no longer cover 40% of the screen with your hand and so its easier to pick out content from the screen. END_OF_DOCUMENT_TOKEN_TO_BE_REPLACED 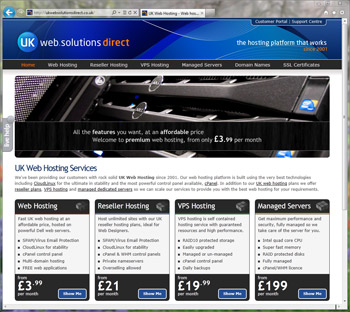 I’m no fan of Linux – in fact I go out of my way to use Microsoft IIS at work to host internal websites, additionally I’m no fan of Dell – again I prefer HP in every single possible way.

But even with this for some strange reason over the past 4 years or so I always have done and shall continue to use UK Web Solutions Direct (who run Linux on Dell servers) for my website hosting.

So why this big difference from my normal Linux/Dell attitudes? END_OF_DOCUMENT_TOKEN_TO_BE_REPLACED