In the vision 2011 video we can clearly see in some scenes the phone is actually semi transparent and as well as having a front touch screen the entire of the back of the phone is touch sensitive as well. The benefit in this is that you no longer cover 40% of the screen with your hand and so its easier to pick out content from the screen. 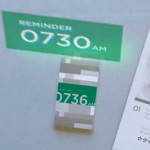 Part of hardware really but I thought this little snippet was worth its own mention – in one part of the video we see that the phone is left turned on with something on the display regardless of if the phone is being used or not. Is this some kind of improved eink technology or are battery lives so long and power consumption so low that phones can be left with something on the display all the time?

The other option to consider is the table could be some kind of near field charging technology (just as we saw with the Palm Touchstone) and given the presence of the tablet which again shows a lack of power cables this could sure be a possibility. 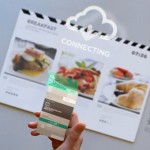 Modern phones in the UK all come with 3G as a standard (or even better) but these modern cloud connected phones certainly do away with the memory stick with the ability to pickup any other device out there and use it as if it were your own. In the video we see this as the user transfers a presentation (one would assume future PowerPoint) right onto the hotels tablet PC with a simple gesture. Near field communication would also have a part here allowing the secure identification of a 3rd party device as something to share your data with.