So first things first….the title of this article is misleading; thus far Avid do not seem to have released a sounds pack specific for Sibelius 8 as you will see on the website when you login in (https://my.avid.com/account/orientation) the only option is for the 7.5 sounds pack. But…this works!

Now deploying Sibelius it’s self in a silent manner is (in my opinion) pretty well documented at this link – http://avid.force.com/pkb/articles/en_US/how_to/en396971.

When you get to the sounds the documentation (again in my opinion) (which can be found here – http://avid.force.com/pkb/articles/en_US/How_To/Installing-and-using-Sibelius-Sounds-across-a-network) is flaky at best not to mention the confusion around version 7/7.5/8.

Well as it transpires their guide is correct in all respects; however, as it states in the clear there is no silent install command for the sounds. Ultimately though its just a copy and paste operation with the addition of a registry key so lets use some PowerShell to get this software deployed! END_OF_DOCUMENT_TOKEN_TO_BE_REPLACED 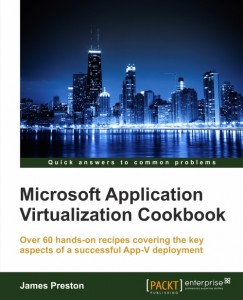 After a fair few months of work and with support from the team at PACKT my new book (Microsoft Application Virtualization Cookbook) is out on sale.

The book is available in both Print and eBook form and can be ordered from PACKT publishing at this link – https://www.packtpub.com/virtualization-and-cloud/microsoft-application-virtualization-cookbook.
Posted in Virtualization | Tagged System Centre, App-V, Application Deployment, Application Virtualization, Remote Desktop Services, RDS, XenDesktop, SCCM | Leave a comment
Recent Posts
About