While carrying out the steps to move our network devices from a flat network to one with purposeful VLANs I had changed the IP address of one of our HP CP3505 printers (using the web based management console) to discover that with the new IP I could not print to the printer over the network.
Oddly enough the web based management console was still accessible, the printer replied to PINGs and SNMP requests but would not print (that includes from Mac and PC!).

With no error messages other than ‘Error – Printing’ on the server, and nothing in the logs of the printer it seemed like this issue would not have a simple solution.

In trying to troubleshoot the issue I tried…

All to no success!

In the end and on a complete whim I changed the network settings of the printer to use DHCP instead of Manual IP, reset the printer and then set it back to Manual IP. It was evident that the IP address I had set previously had been forgotten and I set upon the task of configuring the IP address through the front panel. Long behold this worked and the printer is now happyily printing under its new IP address.

Network Deployed Printers are not appearing in Directory 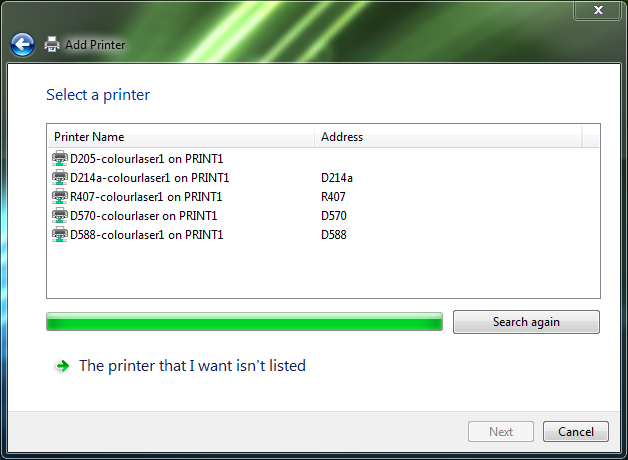 For a few days I’ve found that printers that have been published in Active Directory (from our 2008 R2 printer server) were not appearing in the directory or find printers tabs (see above). With about 120 printers deployed and only 5 showing up there had to be something wrong.

As it turns out the Printer Service was starting before the Server service which was causing a whole load of Errors in event log with error Event 315, PrintService being logged.

The printer spooler failed to share printer <printer name> with shared resource name <printer share name> Error 2114. The printer cannot be used by others on the network.

The fix in this case was to restart the Server service (and if the printers do not appear for a few minutes in directory restart the Printer Spooler service as well).

More details can be seen in the screen shots below.