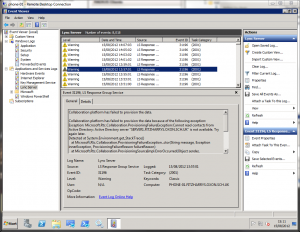 After decommissioning an old Domain Controller I started to see Error 31196 crop up in our Lync server error logs, one of the messages I saw said-

The main key point about this error was the error was coming from the LS Response Group Service, so you know what….I restarted the service and boom this error went away 🙂 Simple fix of the day!

When I was first setting up Lync 2010 for VoIP one of the things that really stumped me for a while was Normalisation Rules. In short these rules take human readable numbers and convert them to the standard for international calling (E.164) – its kinda like how computers take human readable DNS addresses (e.g. bbc.co.uk) and converts them to IP addresses (e.g. 212.58.241.131).

So how do we apply this to UK phone numbers? END_OF_DOCUMENT_TOKEN_TO_BE_REPLACED

Recently we have been deploying shiny new Lync phones at work. These phones mix in with the Lync software client on our staff PCs and in some cases the phones don’t even have dial pads!

The Lync phones we are going to be using are-

The full gallery is over the page 🙂 END_OF_DOCUMENT_TOKEN_TO_BE_REPLACED

When setting up a Lync 2010 proof of concept today I was having issues with getting incoming calls to work. I could get outbound calls (to the PSTN) to work as well as hear audio both ways however under no situation would a call come in (from the PSTN) and ring the Polycom CX700 on my desk.

There had to be something network related going on so I turned to trusty Wireshark (link) and made an inbound call (the results of which are shown below).

After much digging around it turns out that our SIP provider had never seen Lync 2010 before and were sending us SIP INVITE using UDP packets, however Lync 2010 only likes TLS and TCP for SIP communications as such each of these packets that were arriving were just getting dropped (indeed if you turn off the Windows firewall you will see replies going back to your SIP provider saying that the port is unreachable).

So one quick phone call to our SIP provider and boom we are now getting our SIP INVITE coming over TCP instead – would you believe it we can now call outbound and inbound.

By far Lync 2010 has to be the most powerful phone/UC  system I have ever seen (being super low cost for Schools helps as well) – within minutes of getting inbound calls setup I was able to dial in, redirect a phone call to another number inside the site which then auto forwarded the call onto a mobile number.

I’d also like to thank the guys at our Local Education Authority (LEA) for persevering with me for the past few days trying to get the firewall rules right to get this setup!