AMD FX and Hyper-V – Hypervisor is not running 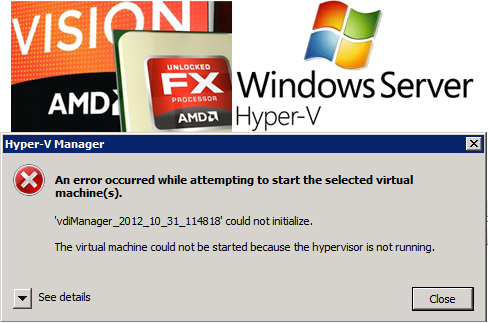 Its a long shot that many people will have this issue but hey why not!

If you have one of the uber new AMD FX Processors (e.g. the 6 core 6100BE) and have tried to run a Windows Server 2008 R2 virtual machine on it you may have seen this error message.

An error occurred while attempting to start the selected virtual machine(s).

‘<VM name>’ could not initialize.

The virtual machine could not be started because the hypervisor is not running.

The cause of this issue is well documented in Microsoft KB 2568088 (link), the short version is the newer AMD CPUs have a feature called AVX included that Hyper-V does not like very much.

As such you can sort this issue out by running the command bcdedit /set xsavedisable 1 at a elevated command prompt.

Just make sure you restart your PC after and boom you will be able to run your virtual machines again!

How much power does a PC use?

Before I go much further into this article I will say – there is no one answer to how much power does a PC consume. You have to take into consideration the internal components (particularly the CPU and if the PC uses a HDD or SSD), the age of the PC, the efficacy of its PSU and also how far its components are pushed.

The simplest way to determine how much power your PC uses is to buy yourself a relatively cheap power meter like this one on Amazon which I got for a little under £10.

All the same the video below shows a selection of the various types of PCs I have to hand and how much they consume, a further write up is over the page.

END_OF_DOCUMENT_TOKEN_TO_BE_REPLACED

Buying powerful PCs pre built is all so well and good but the fun comes in when you build them yourself!

That’s just what we have done at work with some media suite PCs which use 6 core processors, modular PSUs and all other kinds of fun things – full specs and photos to come after the video.

END_OF_DOCUMENT_TOKEN_TO_BE_REPLACED

Time for a new backup server

For the past few months we’ve had a donated storage server sitting in our storage room, with 8x1TB HDDs it was the perfect chance for us to supplement our daily tape backups with the speed of hard drives and move tape to monthly.

The only issue was that the server came with a rather pants Intel Core2Duo processor that didn’t even support 64bit! As such we couldn’t load our OS and Backup Software of choice (Server 2008 R2 and System Centre DPM 2012).

After a few months of waiting for budgets now we have been able to spend the £280 that it took to get some proper components into this server and the photos of it are below, full spec list is on the next page.

END_OF_DOCUMENT_TOKEN_TO_BE_REPLACED 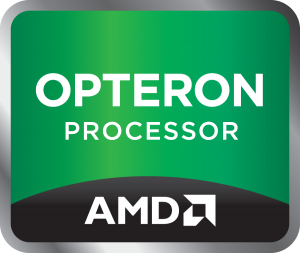 I am a self admitted strong fan of HP server hardware and in this video I’ll give you a tour around one of our servers at work.

There is one little error in the video about ‘common slot power supplies’ – although the DL165 G7 is a great bit of kit the power supply isn’t of the new HP common design and so can’t be changed with ones from more advanced servers (e.g. the DL385 g7).

For more information on the HP DL165 G7 server visit the HP website using this link.

This is old news really but either way HP have updated a number of server models to include the new AMD Opteron 62xx processor series.
The beefiest of all being the Opteron 6282SE which comes with 16 cores each packing 2.6ghz of clock speed. Naturally this kind of speed comes at a high TDP (in this case 140W) especially when compared to the highly conservative Opteron 6128HE (8 core 2.0ghz) which chews through a TDP of just 85W. END_OF_DOCUMENT_TOKEN_TO_BE_REPLACED