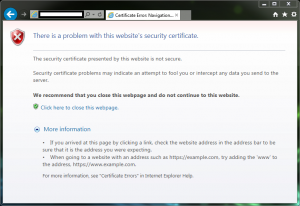 A bit of an interesting one today; while provisioning a pair of shiny new Dell T430s I had obtained and uploaded a valid 3rd party signed SSL certificate to the iDRAC interface with a view to ensuring that whenever an administrator accessed the interface they didn’t get a invalid certificate warning.

However after uploading the certificate and restarting iDRAC I was presented with an error message in Internet Explorer starting that ‘The security certificate provided by this website is not secure’. In researching this it appeared that the site was either running a very old version of SSL or that the certificate had become ‘mangled’ in the server somehow. Either way Internet Explorer, Google Chrome and Firefox did not allow me to bypass this error message.

VN:F [1.9.22_1171]
Thumbs up if this article helped you 🙂
Rating: +7 (from 7 votes)
Knackered your iDRAC 8 web console by uploading a Custom SSL Certificate Signing Certificate? - Fix, 100% based on 7 ratings
Posted in Hardware, Servers | Tagged Dell, iDRAC, SSL