Published 17 July, 2012 | By James Preston
This entry is part 2 of 5 in the series Custom RemoteFX RDS Farm

Following on from my first post I am going to look at what will make up by RemoteFX RDS farm including the software and hardware architecture.

In my case the servers have only 2 hops between themselves and the endpoints over a fibre optic to a local network switch and then down copper 10/100mb to the client. For the time being the endpoints are just re purposed PCs however we hope to replace them with dedicated thin clients (mainly for power saving reasons) in the next few months.

The connection broker will be hosted as a virtual machine on one of our Hyper-V servers however to make use of RemoteFX technology (will go into this in a little more depth in a later post) the session hosts will all be running directly off physical hardware.

The hardware requirements for RemoteFX are quite specific but not all that hard to meet using even desktop PC parts. The key thing is the CPU must support something called Streaming SIMD Extensions 2 (SSE2), in this case I will be using AMD A8 Fusion APUs which do indeed support this feature. One thing to point out that also a GPU certainly helps (video decoding ect) its not a necessity however if you want any kind of semi decent performance you will want one. This differs from RemoteFX for VDI which does require a GPU and can even do 3D acceleration (RemoteFX for RDS Session Host only does 2D and no Aero Glass). 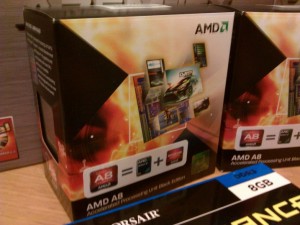 The full hardware specifications for the session hosts is below