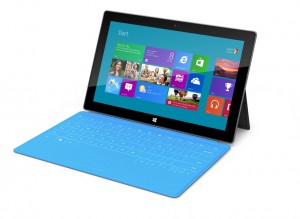 Unless you have had your head buried in the sand for the past few days you will know that Microsoft has showcased their take on Windows 8 tablet PCs.

Microsoft are saying that the ARM based version (Windows RT) will be available at ‘competitive prices’ when Windows 8 goes on general sale (I’m thinking that could be around October) and that the Intel version will come 90 days after.

The specifications sheet of both tablets can be found on the Microsoft website here.
Furthermore you can watch the 45min long keynote/demo from Microsoft here.

It makes sense that Microsoft would go for the larger end of the tablet PC screen sizes, for Windows 8 to be able to multi task (i.e. have two applications side by side with one snapped) you need to have a screen resolution of at least 1366 pixels wide to get that kind of pixel density on a 7″ tablet isn’t easy and if you want to be multi task class productive on a tablet PC a 7″ screen just dosn’t make sense.

One thing I like a lot is the inclusion of Gorilla Glass in the screen which makes the screen ultra strong, the magnesium case gives a very professional look to the whole device as well – it certainly is heads and shoulders above some of the plasticity cheap looking Android tablets out there.

The only thing which I don’t get about the case design is the start button in the middle of the tablets bezel – the way I see it if the button were on the far left hand side (as it is on the Acer W500) then if you were holding the tablet with two hands it would be more than easy for you to reach out with your thumb and get right back to start. 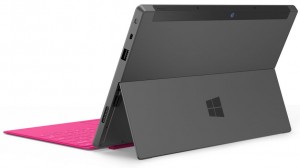 Back in my days of college I used to own a Asus R2H Tablet PC (at that time they were called ultra mobile PCs), one of the best things about it was it had a kick stand built right in – the Microsoft Surface tablets also have this wonderful little feature built right into the case which means…..no buying silly stands!

As far as hardware features go this is second only to the inclusion of a fully functional USB port (expect this on most if not all Windows 8 tablets!), you might say well you need a desk to use the stand..well…think of all those times you were

UPDATE – For more info (and a video) about drive encryption security on Surface RT click here.

The security of data on mobile PCs has long been a worry for IT Departments however since Windows Vista total disk encryption through BitLocker and a TPM chip has given companies a easy way to secure data. The Windows 8 Pro Surface uses this same (remotely manageable) BitLocker encryption and the RT version uses TPM technology to achieve total drive encryption (without the remote management – but then again its a consumer device). 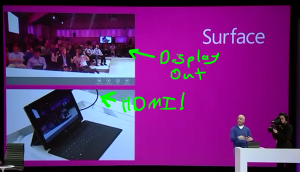 Ok besides the kick stand and USB port this is also my favorite hardware feature – one issue you may face with competing tablets is the lack of the ability to get what is showing on your tablets screen to a projector/TV/screen. Both versions of Microsoft Surface solve this relativity simple problem by including a HDMI port on the RT version and a DisplayPort port on the professional edition – so no more need to buy a £22.50 adapter just plug in and go.

One thing you may say is well that’s Mini HDMI – I don’t have a Mini HDMI port on my TV! Well this cable can help.

Will I be buying?

I am totaly set on getting myself a Windows 8 tablet when they come out but is this the tablet that I would be after? My only one concern is the current apparent lack of 3G/4G/somethingG connectivity – WiFi is good but I would very much like a device that has the always on connectivity of a phone so I can grab my emails and the Internet while on the go. Yes I can just use my HTC Pro 7 as a WiFi hot spot however that isn’t the kind of experience that I want to go for.

All the same Microsoft certainly has made this the benchmark from which all Windows 8 tablets will be judged, if they could include 3G then it would be 100% perfect and hopefully they will pick up on this missing feature include it and I won’t have to consider other options.