What happens when you put a OCZ PCI-E SSD in a server? 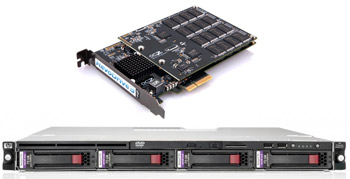 For a while I’ve been wondering just how well a PCI-Express Solid State drive would work inside a standard off the shelf rack mounted server. Finally I have been given the chance to find out and as it turns out everything works quite nicely.

The solid state in question is a OCZ Revo Drive 3 x2 240GB (from Novatech) and the server is a HP DL165 G7. Both the SSD and the server have the latest BIOS updates and although initially the server didn’t boot past POST after a little tweaking (inside the BIOS of the server) I got everything to work along quite nicely.

Sufficed to say the performance is astonishing even when compared against a RAID array of 15k SAS drives but then again that’s nothing to be surprised about given the SSDs ability to randomly read data from anywhere on the drive without having to wait for a mechanical spinning disk to catch up. 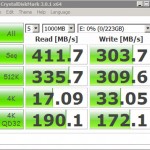 Scores on the doors were as you see to the right (click to expand the image). Although I’ve seen more impressive results from this SSD in various benchmark tests (running the same testing software) I think the reduced speed may be due to the slower speed of the RAM in the DL165 compared to those particular test setups (1333mhz against 1600mhz).

Currently the plan is to run App-V and Lync 2010 off this solid state and so far both have performed just as expected (haven’t seen the disk response times go above 2ms yet!) – and if all goes well I will be hosting some virtual desktops (VDI) off similar drives.

For more information on the OCZ Revo Drive 3 x2 visit the OCZ website.

2 Responses to What happens when you put a OCZ PCI-E SSD in a server?