Virtual Desktops on PCI-E SSD – Getting the image ready

Published 30 May, 2012 | By James Preston
This entry is part 3 of 6 in the series Virtual Desktops on PCI-E SSD

One of the great things about VDI is the ability to create a ‘golden image’, that’s one single image that includes the OS and Software which can be accessed from any endpoint. Whatever VDI software you go with will then take that golden image and duplicate it multiple times to provide the desktops for your users.

However this masse creation of desktops can cause a bit of a IO overload…..one problem of many that a SSD can solve….

The screenshots below shows the top performance (from the 4x15k SAS array and the SSD) seen when 20 desktops are being created. 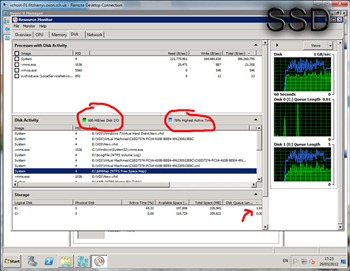 With the SSDs ability to randomly read/write lots of data at the same time I would also like to imagine that when creating larger numbers of desktops that the time difference between HDD and SSD would increase exponentially.

To finish off and as a little fun the image to the right shows the SSD doing a sequential read/write as it takes a testing desktop image and turns it into the finished article…ever seen 600MB/s from just a single drive?