Microsoft has also demonstrated (video to the right) as to how these web services are built right into the OS in a way that is already familiar to me. This kind of continuity between devices can’t be matched and Android tablets (although Apple does very well with the iPhone and iPad offering a very similar user experience).

As a IT professional I use Remote Desktop (RDP) and the Microsoft Management Console to quickly access and manage services on servers within my organisation. Remote Desktop applications are available on other tablet OSes but as yet I am unable to find a Active Directory Management console application that allows me to change a users password without even having to establish a RDP session.

For a pretty in depth video of what is going to be new in Windows 8 for Remote Desktop visit this link.

Personal and business security is a big thing for many individuals and IT organisations. One of the common cited security issues with Android tablets is the ability to jailbreak the device which allows the ability to do almost anything with the device – this also opens the option for malicious code/software to run as well something which can very quickly compromise the security of the device.

Currently both the iPad and many Android tablets offer ‘hardware assisted encryption’ – however I am still yet to find any serious documentation as to what this actually is. For sure though its not a TPM chip which is the standard in enterprises of all sizes for serious security (something which Windows PCs have supported since Vista *shudder*).

Also one of the simplest security features out there (a fingerprint reader) is still overlooked on all tablets currently on the market – ultimately anyone could (with enough time, intelligence or a good guess) figure out a pin password or drawn shape but it is very very very difficult to guess someone’s fingerprint. Naturally Windows 7 tablets already have this feature built in – something that will be carried over to Windows 8.

If that wasn’t enough where is the smartcard support and support for any and every kind of software VPN that you will only find in a Windows tablet. 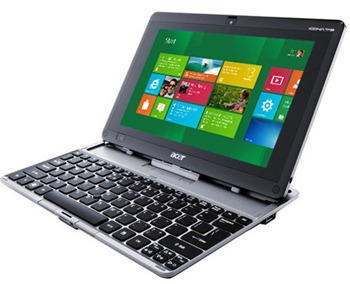 True replacement of the desktop/notebook

In my ideal world I would have one single PC, where I can pickup a tablet from a charging dock at home go to work and use my tablet as a work PC hooked up to a full screen monitor, then on the train home plug the tablet into a keyboard (notebook PC style) only to return home later and sit on the sofa playing Angry Birds.

In essence this is already possible…

If we look at the way PCs have evolved over the past few years the bottle neck in performance hasn’t been the processor or the amount of RAM (Word 2010 and Internet Explorer 9 runs just the same on a Pentium 4 with 1GB RAM as it does on a AMD Fusion A8 with 8GB RAM) but in the hard drives speed (or lack thereof) – all of this has changed with the introduction with the Solid Sate Drive.

Asus, Acer and Samsung in actual fact already offer tablets with AMD C-50 and Intel i5 processors – all of which offer this pickup and go tablet PC convenience with the speed of full desktop/notebook PC thanks to its solid state drive.

So far these tablets haven’t taken off because Windows 7 doesn’t have the same consumer appeal as conventional tablets – however Windows 8 is being positioned so that it should cause this kind of take off in mobile computing (and offer me what I want from a truly mobile full PC).