Please Note – Microsoft have now confirmed that there will not be 3G/4G in the Surface through the complete specs which can be seen here.

As the momentum builds for a midnight release of the Microsoft Surface (thanks to the Reg) Microsoft are still keeping very quiet about a lot of key things – most notably will it have a 3G/4G connectivity.

Even in its RT version Surface has a lot of things going for it over other tablets like full USB, HDMI, TPM encryption (Bitlocker managed in the Pro version), integrated kick stand, Microsoft Office, a design and build quality that IMO rivals the iPad and its touch covers which build in a cover and keyboard into one item.

We do know that the Asus Vivo RT comes with 4G (in at least the US) but still no mention of the Surface getting it.

Personally this is the biggest feature that the Surface needs to succeed – without it the Surface would become a tablet that you can only use at home/at work (assuming you have Wi-Fi). Yes you may say you could hook up to a coffee shop Wi-Fi network or your phones tethering ability while out and about but nothing beats the seamless nature of 3G built right in.

So I say to Microsoft- 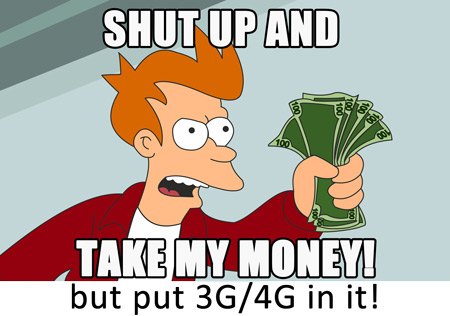